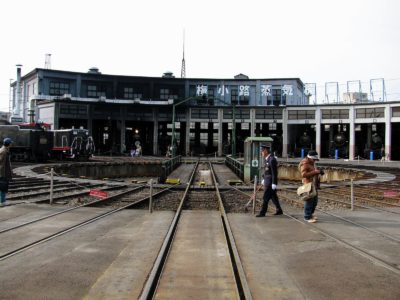 The Umekoji Locomotive Museum, which was in the corner of Umekoji Park until August 2015, consisted of “steam locomotive exhibition Hall” utilizing the fan type and turntable of the former Umekoji engine depot, and “Materials exhibition hall” reconstructed and restored the old Nijo station building.

The Steam Locomotive Exhibition Hall has been exposed to a lot of the real thing of the steam locomotive of nostalgia such as D-51, some were exhibited to put in the driver’s room.

In addition, there are a lot of railroad models exhibited in the Material Exhibition pavilion, and it was made to run the model in the diorama of the railway model. However, it seems that children are playing, and it might not turn easily even if waiting.

The Umekoji Locomotive Museum was reopened in April 2016 as the Kyoto Railway Museum, including the exhibition of trains.

Moreover, the topic is called even in the thing that the aquarium was able to be in the same Umekoji park.

The Kyoto Aquarium is a new topic in Hichijoumekoji Park, and it is very crowded with children and students every day. Because there is no sea in Kyoto City, this facility which can touch the living thing of the sea is valuable.

Toji is the head of Toji Shingon and is also called "Kyouougokokuji." Its upbringing is said to have been erected by Fujiwara-no-isendo in 796 after Heian-Kyo capital.