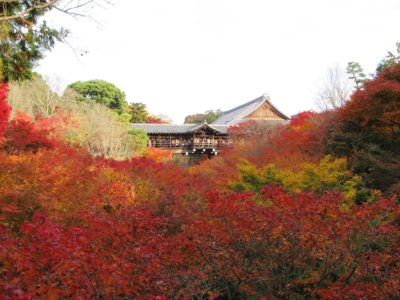 Tofukuji is a temple of the Rinzai Tofukuji sect. The beginning of the history of Tofukuji is that the Kujoumichiie, who was regent at the time in 1236, took single character from the name of Todaiji and Kofukuji in Nara and erected the temple under the name Tofukuji.

Tofukuji’s specialty is the autumnal leaves, and it crowds with a lot of autumn foliage spectators in late autumn season. The corridor, especially called Tsutenkyo, is a great highlight of the foliage surrounded by many red leaves. I thought that the Tofukuji was the most splendid as foliage spot in Kyoto as the impression of the author who had variously looked around Kyoto.

Many people come to this temple to take pictures with their cameras. It is prohibited to take pictures using a monopod or a tripod, so take care. In addition, I have not entered, but there is also a splendid Japan garden called Honbo Garden.

The area around Kyoto station

Toji is the head of Toji Shingon and is also called "Kyouougokokuji." Its upbringing is said to have been erected by Fujiwara-no-isendo in 796 after Heian-Kyo capital.