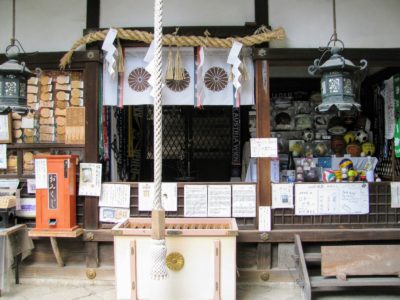 Shiramine Jingu Shrine is located in the northeastern corner of Horikawa Imadegawa in Kamigyo-ku, Kyoto City. Sutoku Emperor and Junnin Emperor are enshrined.

Emperor Komei was ordered to the shogunate to transfer Emperor Sutoku’s Holy Spirit enshrined in strange land to Kyoto to comfort the his spirit , in the end of the Edo period, but Emperor Komei emperors death soon thereafter. Emperor Meiji who is the child of Komei succeeded in Komei dying wishes, built the shrine to the present land, and created the Shiramine shrine in the fourth year of Keio (1868).

In 1873, the Holy Spirit of Emperor Junnin was welcomed from Awaji, and was enshrined together, and Shiramine Miya became a shiramine shrine.

Shiramine Jingu Shrine is located at the site of the court noble “Asukai family” which was the head of Waka and Kemari. The Seidaimyojin, which is enshrined in the landowner of this shrine, is the guardian deity of the Kemari, and is now a guardian of “Mari” and attracts the pilgrimage of sports officials including football. On the day I went to shoot, there were a lot of football, baseball and basketball balls in the main shrine, and many of the students who seemed to be playing clubs were coming to visit. Moreover, the amulet named Kanauwa is famous as a lucky charm of shiramine Jingu shrine. It mimics the ball used for ball games (soccer, baseball, volleyball, basketball, tennis, badminton, table tennis).

Seimei Shrine is a shrine located in south west of Horikawa Imadegawa intersection. It enshrines the Abenoseimei who is an astronomer in the middle of the Heian period.

Goo Shrine is a shrine on the West side of the Kyoto Imperial Palace, and it enshrined the Wakenokiyomaroko contributed to the founding of Heian-Kyo.