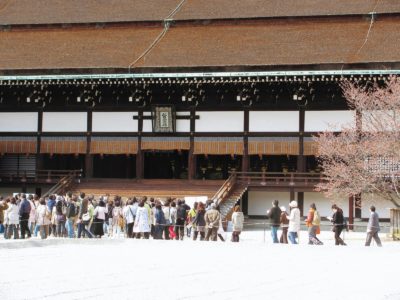 The Kyoto Imperial Palace is called “Gosho” by the neighboring residents and is popular. From the 14th century to the early Meiji period, this is the place where successive emperors lived, priest rituals and public service. Even today, buildings are left intact. Since the Meiji era, it is also called Kyoto Palaces.

The site of Kyoto Gyoen, which surrounds the Kyoto Imperial Palace, is planted in various places with plums, cherry blossoms and pine trees, and it is now used as a park for citizens and tourists. Kyoto Gyoen is suitable as a walk road, but it is not suitable for cycling because the entire area is gravel-paved. Also, when you visit the cherry blossom season, it is a place to show the atmosphere as a tourist destination.

The Kyoto Imperial Palace is now open to the public throughout the year, so you can watch the imperial household and the collection when you visit. The admission fee is free, so I think it’s a good spot to visit now.

It is in the place where the municipal subway is descended at Kuramaguchi station and it enters the east a little. Although it is located in the city, it has a sense of healing like an urban oasis.

Shimogoryo shrine was erected together with Kamigoryo shrine during the Heian period. It is revered as a shrine to protect the imperial court and the capital by fleeing the plague disaster.