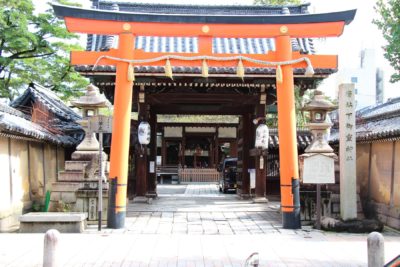 Shimogoryo shrine was erected together with Kamigoryo shrine during the Heian period. It is revered as a shrine to protect the imperial court and the capital by fleeing the plague disaster.

This shrine is in the south of the intersection of Teramachi street and Marutamachi street. I had heard the name as such, but it was a smaller shrine than I had expected. The impression was that it was not a showy shrine that would be visited as a tourist destination, but rather a shrine for the visits of neighbors.

There is a pump that pump underground water in this shrine, and the worshippers seem to be able to give the famous water for free. There might be a lot of people who are doing the tea ceremony in this vicinity, and it might be used as water for the tea ceremony.

It is in the place where the municipal subway is descended at Kuramaguchi station and it enters the east a little. Although it is located in the city, it has a sense of healing like an urban oasis.