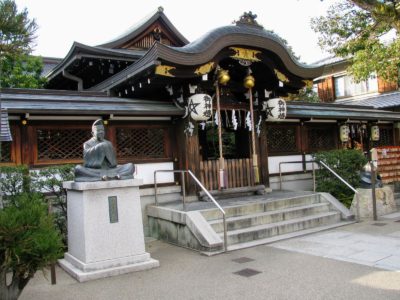 Seimei Shrine is a shrine located in south west of Horikawa Imadegawa intersection. It enshrines the Abenoseimei who is an astronomer in the middle of the Heian period. It was founded in 1007. In order to quell Abenoseimei’s spirit by the Ichijo Emperor, who was praising the feat of Abenoseimei, the shrine was established in the present place which is the site of Abenoseimei’s mansion.

At that time, it was a vast site, extending to Horikawa Street on the east, to Kuromon Street on the west, to the Motoseiganji Temple Street on the north, and to the Nakatachiuri street on the south. However, as the time went by, it was gradually shrinking by urban development and etc.

Seimei Shrine is a shrine of “amulet” and “charm”. There are “Seimei well” which is to be cured of the incurable disease, “peach that is protecting against misfortune” which is considered to be the fruit of amulet and charm, and “sacred tree” which is said to be profitable when touched. As the name of Seimei, it is also a shrine to give a name to the baby born.

If you continue the approach from the first torii of Horikawa Dori, there is an old Ichijo bridge and Shikigami stone statue in the left hand. The Ichijo Bridge is famous as the place where Watanabe, who is one of Minamoto-no-yorimitsu’s big Four, cut off Ogress’s arm. The current Ichijo-modori bridge hangs on the Horikawa at 100 meters south of the Seimei shrine, but it is a custom that the Trousseau and the funeral line do not cross this bridge because people hates “back” today. There is a second torii, and there is Chozusha and Seimei well, then you reach the main shrine in the further the approach of the Seimei shrine. There are a statue of Abe-no-Seimei and amulet peach at side of main shrine.

When I went to the Seimei shrine to shoot, from the high-profile of the yin-yang teacher (Onmyoji) and Seimei Abe who gained popularity in the novel of Yumemakura Baku which was also made into manga and film, even though it was a weekday daytime, a lot of young woman’s worshippers came to visit. It was a pilgrimage to the Holy Land.

Shiramine Jingu Shrine is located in the northeastern corner of Horikawa Imadegawa in Kamigyo-ku, Kyoto City.

Goo Shrine is a shrine on the West side of the Kyoto Imperial Palace, and it enshrined the Wakenokiyomaroko contributed to the founding of Heian-Kyo.