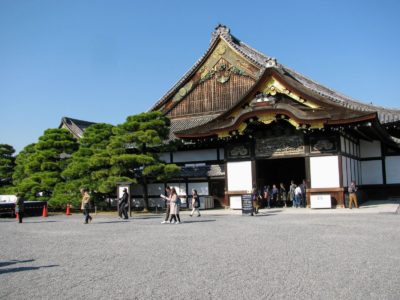 Nijo Castle is a castle that was built in the Edo period, and the one that remains now is the one erected by Mr. Tokugawa. It is the beginning and end of the Edo period, with the celebratory ceremony of Ieyasu Tokugawa’s Shogun Senge, and the Yoshinobu Tokugawa of restoration rule of the Tokugawa Imperial.

Today, Nijo Castle does not have a castle tower that can be seen in a common Japan castles, but in the Edo period, there was a five-storey castle tower. The castle tower has not been rebuilt since it was destroyed by lightning in 1750, and now only the foundation of catsle is left.

As a tourist destination, Nijo Castle is worth seeing, including the Ninomaru Palace, the Castle Palace, and the splendid Japan garden. In addition, approximately 380 cherry blossoms are planted, and it is attention because the light up at nighttime is done in the season of the best time of the cherry blossoms.

The Nijo castle has regular holiday. Please note that every Tuesday in January, July, August, and December (If the day is a public holiday, the next day.), December 26-January 4 is a day off, so be careful when you come.

Shinsenen is a temple of Toji Shingon in Nakagyo-ku, Kyoto. It is located on the south side of Nijo Street from Nijo Castle. The original was a garden for the emperor who was built adjacent to Heian-Kyo Daidairi.