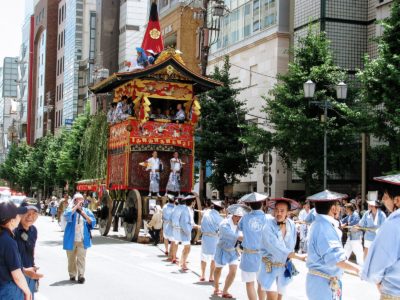 I think that the place where the work of the turnabout called “Tsuji turning” is seen is the intersection of Shijo Kawaramachi. However, the author was able to take pictures at this time from the Kawaramachi Oike intersection, and it was possible to see “Tsuji turning”. When you visit the site, you had better prepare a strong heat stroke measures such as a folding fan, a round paper fan, hat, hydration, and sunscreen. There are also paid seats in various places.

Gion Festival was called “Gion Goryo KAI” until the Meiji period in the festival of Yasaka Shrine in Higashiyama Ward, Kyoto City. The origins of the Gion festival are said to have “the Imperial Court” the first Holy Spirit meeting in Shinsen-en in 863 (Jogan 5 years) to pray for good health due to the epidemic of the plague in Kyoto.

Honnoji is a temple of Nichiren Buddhism, southwest of Kawaramachi Oike in Nakagyo ward, Kyoto. This temple is very famous in Honnoji incident that Mitsuhide Akechi avenge Nobunaga Oda.

Nijo Castle is a castle that was built in the Edo period, and the one that remains now is the one erected by Mr. Tokugawa. It is the beginning and end of the Edo period, with the celebratory ceremony of Ieyasu Tokugawa's Shogun Senge, and the Yoshinobu Tokugawa of restoration rule of the Tokugawa Imperial.