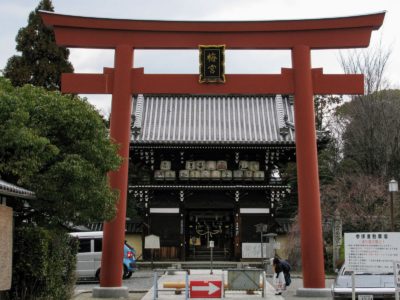 Umenomiyataisha is a shrine in Umezu, Ukyo-ku, Kyoto. It is a shrine known as Tachibana’s tutelary deity. Umenomiyataisha was originally built near the Tsuzuki County Ide town in the south during the Nara period, and it was relocated to the current location by Tachibananokachiko (Danrin empress) in the early Heian period.

Umenomiyataisha is known for the Kodakara, the prayer for the birth, and the god of sake, but it is also attracting attention as a “cat shrine”, and there seems to be some visitors who come to see cats in the shrine grounds and gardens. On the day I went to shoot, friendly cats were relaxing. Cats are mainly around the reception of shrine office. I’ve grin been molested by cats when I buy Shinen tickets.

There is a Shinen to surround the main hall, and flowers for each season are planted, such as plums, camellia, hydrangea and iris, and so it’s built like a botanical garden and Japanese gardens. This time, it was aimed at the time when the plum blooms, but seems to have been a little earlier. Even so, I have taken a lot of pictures of plum trees, so I’m happy if you look at them.

On the first Sunday of March, there is a Ume Ume festival to pray for Kodakara delivery, and plum juice made from libation and Sinen plums is free. (from 9:30 a.m. to 4:30 p.m.) In addition, the Shinko festival is held on May 3 every year. (Eve Festival is also the day before) in Shinko Festival, 16 groups of children Mikoshi and large Mikoshi shrine the district of parishioner Circumambulation, and the large Mikoshi enters the temple in the evening. Shinko Festival’s Day will be published Shinen free of charge.