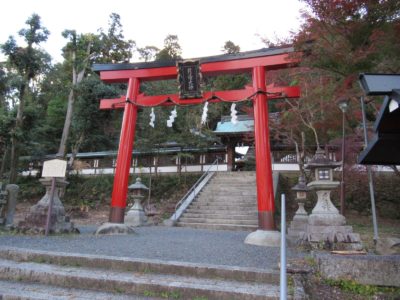 Tsukiyomi Shrine is located in the Nishikyo-ku Kyoto-shi, 400 meters south of Matsunoo Taisha. Enshrined deity is Tsukiyomi-no-mikoto. Tsukuyomi is known as the Amaterasu’s fraternal deity in the myth of “Kojiki” and “Nihon-shoki.”

Tsukiyomi Shrine, the Sessha of the Matsuno Taisha shrine, has been involved with the Jingu empress in the precincts, and since it has enshrined the “Tsukinobe stone” which is the stone of the origin of easy delivery faith, untill today it has been widely revered as “Shrine of easy delivery patron”. From ancient times, the mother who is harboring a new life, pray to the shrine to the “Day of the Dog” in hopes of a cheap and restful birth, it is practice to do the prayer.

Matsuno-Taisha is the oldest shrine in Kyoto, and it is said that the inhabitants who lived in this region of the ancient times were enshrined in the Holy Spirit of the Mt.Matsuo and made it the guardian deity of their life.