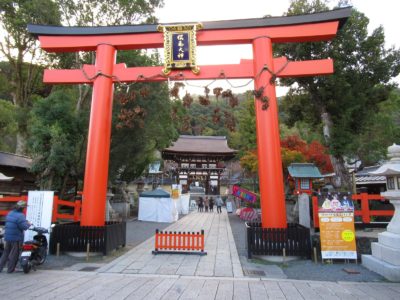 Matsuno-Taisha is the oldest shrine in Kyoto, and it is said that the inhabitants who lived in this region of the ancient times were enshrined in the Holy Spirit of the Mt.Matsuo and made it the guardian deity of their life.

It is said that the Hatano-imikitori which bestowed Emperor Monmu’s Royal command in 701 year shrine and established the shrine. After that, the shrine was treated as a guardian god by Mr. Hata. After the Heian-Kyo capital, along with the East Kamo Shrine (Kamigamo shrine, Shimogamo Shrine), it is called that the “East strict god and the West fierce spirit”. Since the Middle Ages, it has been believed as the god of sake, and it is still the devout shrine of the faith from the brewing house.

The grounds of the temple include a garden of water, a garden of Joko, and a garden of Horai. There are three gardens (at an extra charge) and you can see unique gardens. In addition, there is a spirit turtle waterfall in the seeing course. Near that, there is a spiritual spring called turtle well. The brewing house seems to use this water as the original water of sake and to mix it with water.

Enshrined deity of Tsukiyomi Shrine is Tsukiyomi-no-mikoto. Tsukuyomi is known as the Amaterasu's fraternal deity in the myth of "Kojiki" and "Nihon-shoki."