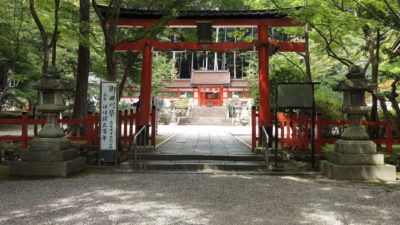 Oharano Shrine is a shrine in Nishikyo-ku, Kyoto City, and is called “Kyoto Kasuga” too.

Oharano Shrine has been collecting faith as the Guardian God of the woman who has been giving the so as the god of Politics, Katayoke, and wisdom for a long while.

Geographically, it is adjacent to the Shoji Temple (Flower temple), so I think it is good to be strolling together.

Shojiji Temple is a temple of Tendai in Nishikyo-ku, Kyoto, honorific mountain name prefixed to a temple's name is Oshio mountain. The principal image is Bhaisajyaguru. It is said that Saigyo, a singing monk, became a priest in this temple, and because there is a double cherry blossom "Saigyo Sakura" which is said that the Saigyo monk planted himself, it came to be familiar as "Temple of the Flower".

Kyoto City's western New town is also known as a new town surrounded by bamboo, located in the Oeda and Oharano of the bamboo region. However, because a lot of bamboo was cut down by the construction of the new town, the Bamboo Grove Park was opened hearing the voice of actively saving the remaining bamboo grove.