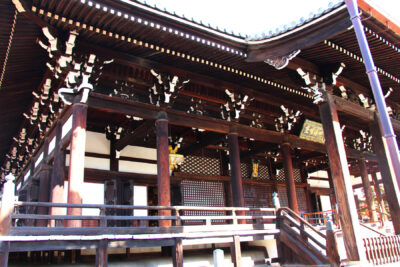 As the points to see in Myokenji, there are four gardens, which is called as the garden of Sikaishoudo, the Tuboiwa of bamboos, the garden of Kourinkyoksui, the garden of five-color camellia and Pine respectively. Each has different taste, which make viewers fun.

It was holding an event called art museum in entire Myokenji and I could enjoy various art works of “ Japan “. Among them were the graduation work by students of Traditional Arts School of Kyoto. It is very reliable that there are some bearers for the traditional arts of next age.

Also, there is very respectable Mr. Gohonzon inside the large main hall, but there was no picture as I wasn’t given permission to take photos of it.

Please make caution as you can’t get to Myokenji unless you come from Nishi no Horikawa Street due to one-way when you drive or ride on a motorbike.