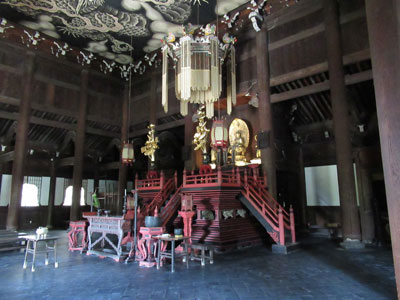 Kenninji Temple is the main temple of a Rinzai sect Kenninji school. The person who built this temple is Eisai Zen Master. The person who made its base is Yoriie Minamoto. It was opened in 1202 (Kennin 2 in Kamakura era) and its name was named after the name of an era at that time.

There is the famous Wind God Raijin Folding Screen displayed in the main hall. Although a digital duplicate is displayed now, the folding screen has great impact. If you could decorate such a thing in your home, you might feel like you become rich.

In addition, there are fusuma paintings having drawn each place and it was a place like art museums of “wa”.

Furthermore, there were dry garden and Japanese garden of moss and many worshippers were relaxing watching the garden.

We go forward Hatto in another annex after replacing to slippers. There is a beautiful golden Buddha statue in Hatto, and there is a big Saangyong figure having drawn in ink painting in the ceiling, which overwhelms its viewers.

Kenninji Temple has a great number of points to view and was the place where people for sightseeing enjoy too.