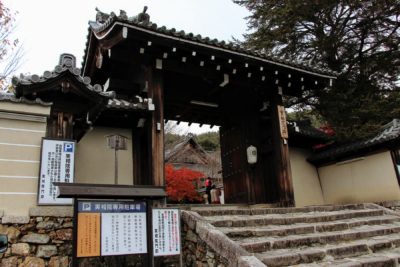 Jissoin is a Buddhist temple in Iwakura, Sakyo-ku, Kyoto, the founder is Joki, and the principal image is Acala. Jissoin is a small temple, but there are two Japanese-style gardens in the precincts. One of them is between Shoin and precinct in the Sansui garden. One of them is between Shoin and Kyakuden in the Sansui garden. Another garden is the majestic rock gardens with views of Mt. Hiei.

In addition, “floor maple” and “floor midori” are worth a look because the outside trees are reflected in the floor of the room called the waterfall room. (Photography is prohibited.) Jissoin is known as its famous viewing maple leaves spot in northern Kyoto city.

Apart from the photos listed here, it was a place where there was a tightened atmosphere unique to temples such as a magnificent Buddha statue.

It is this big Kurama tengu to greet us when getting off the Eiden Kurama station. Niomon that is the entrance of Kurama Temple exist in the place that climbing a little from here on road, from there it become a course of a little mountain climbing and hiking.

Kifune shrine is a shrine that has been praying for the god of rain for a long while, and is gathering faith from people in the business of dealing with cooking and water all over the country as God of water.