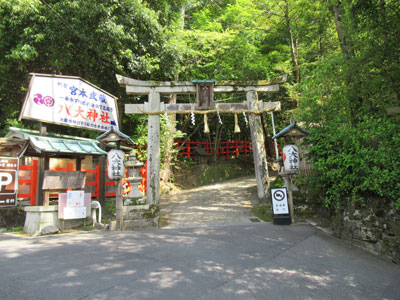 Hachidai Shrine is a shrine that is located in Kyoto City Sakyo district Ichijoji Matsubara town and its former shrine ranking is village shrine. Its Saijins are Susanoono Mikoto, Inadahimeno Mikoto, Hachiojino Mikoto.

There is an anecdote left that in the early stage of Edo era, Musashi Miyamoto who made duel with several tens people from Yoshioka clan at Ichijoji Kudarimatsu, thought to ask the god for its benefits before the duel but he stopped just before doing so realizing his weaknesses.

Inside the shrine, the old tree of Ichijoji Kudarimatsu is stored for display. By the way, the description of the origin of the displayed old tree is as follows.

“This old tree is a part of pine tree at that time when the master swordsman Musashi Miyamoto made a duel with Yoshimoto clan.”

The precincts of Hachidai Shrine located at the foot of the mountain is cool during the very hot days in summer and I could see worshippers who were sitting on a shaded bench and making them cool.

Shisendo which is located in Kyoto City Sakyo district Ichijoji is a ruin of a mountain cottage where Jozan Ishikawa who was the cultural person in Edo era spent his last days.

Enkoji temple is a temple of Rinzai sect Nanzenji school. Its mountain title is Zuigan-mountain. Its principal image is Senju Kannon.