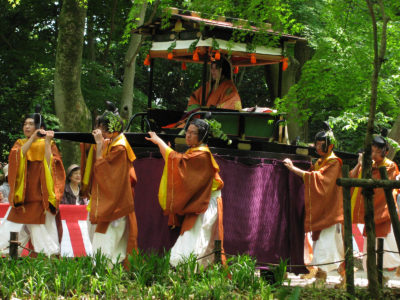 Aoi Festival is the one that is held in May 15th in Kamomiso shrine(Shimogamo shrine) and Kamobetsurai shrine(Kamigamo shrine). It was called the Kamo Festival or the festival in the north in old days. Aoi Festival is one of the Sanchoku Festivals which those are the special three festivals of the ritual of the shrine where the emperor’s Messenger is dispatched and performed like Iwashimizu Festival and Kasuga Festival, and it became a festival of aristocrats for visiting to the sights from it what had been done as an event of Mr.Kamo and Chotei. And so on, Aoi Festival is one of three big festivals in Kyoto like Gion Festival and Jidai Festival.

The woman who is riding in a cart in the photograph is the leading role of the festival, and she is Saioudai. What a elegant a graceful spectacle. Saioudai is a substitute for Saiou, and is is said that it is an unmarried princess and queen who once served to the shrine of Ise Jingu Shrine and Kamo. The People of Kyoto have been told that they have gathered to see the gorgeous procession of Saiou at the time of Aoi Festival.

The Shimogamo Shrine is officially called the Kamomiso Shrine. The registration of UNESCO's World Heritage has raised the profile. It is said that it is a shrine honoring the god of the ancient clans Kamo, along with Kamigamo shrine(Kamobetsurai shrine). The south side of the shrine is a native forest called Tadasuno forest, with old trees.

Kamigamo Shrine is formally called Kamobetsurai Shrine, and is located in Kamigamo, Kita-ku, Kyoto-city. It is registered as a UNESCO World cultural heritage and attracts attention.

The Kawai shrine is a shrine on the grounds of the Shimogamo shrine. This is a shrine of women's patron, and there are many female worshippers.