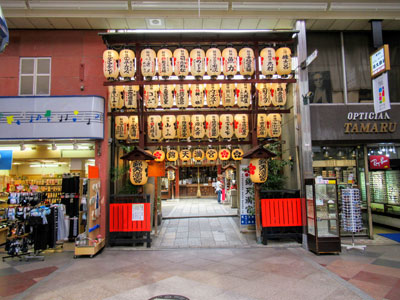 Nishiki Tenmangu shrine worships Michizane Sugawara known as the god of learning as its Saijin. Its location is in the middle of Shinkyogoku Street just in front of Nishiki market which is the kitchen in Kyoto. Because of this, in addition to the benefit for academic achievement, business flourishment is also cited as its benefit. It is familiarized as “the heavenly god in Nishiki” from the local residents.

In Nishiki Tenmangu Shrine delicious groundwater called “Kyoto’s famous water the water in Nishiki” is gushing out. It seems that people from the neighborhood eateries come to fetch.

There is a design error in the torii between Teramachi in Nishikikoji Street and Shinkyogoku and we can see bizarre landscape that both side tops of the torii are sunk into the building.

Honnoji is a temple of Nichiren Buddhism, southwest of Kawaramachi Oike in Nakagyo ward, Kyoto. This temple is very famous in Honnoji incident that Mitsuhide Akechi avenge Nobunaga Oda.

Mikane Shrine is a small shrine with a golden torii gate located in Nakagyo-ku, Kyoto. Many people visit the shrine to pray for good fortune.

The Kyoto Daijingu Shrine was built as a facility for people who could not visit the Ise Shrine, which had been popular since the end of the Edo period (1603-1868), to worship at the Ise Shrine in all prefectures in Japan after the Meiji Restoration.