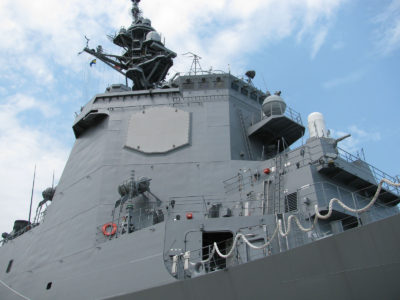 The Maizuru Naval District was established in October 1888, then it developed as a naval base until the end of World War II. It reaches present as Maizuru District Corps of the Maritime Self Defense Force.

Maizuru district corps can appreciate warships on ordinary guests on weekends, and some can watch the interior by boarding the ship.

Although it will not be imagined from the television screen etc., the actual ship (Aegis ship class etc.) is overwhelmed with about 10 meters in height. Also, Japanese warships generally are well maintained and are characterized by few ships with iron rust.

When I went shooting here, I have a memory that I watched here on Sunday and went to the Air Self Defense Force Komatsu Base on Monday the next day to watch fighter plane.

The Motorcar Museum of Japan collects cars that were active in Japan country in the twentieth century, about 500 automobiles are exhibited in the available state.

Fukuchiyama Castle is located in the city of Fukuchiyama, Kyoto Prefecture. It was the residence of the Fukuchiyama clan in Edo period.