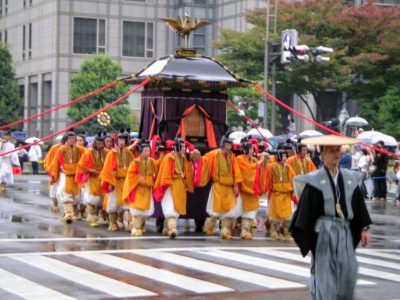 Jidai Festival is one of the three major festivals in Kyoto held on late in October every year, and it is a festival of relatively shallow Heian Jingu, which began in the Meiji period.

The Jidai Festival is a festival in which the people who wore the costume by customs of each age before when the capital moved to Tokyo are procession, “Meiji Restoration”, “Edo period”, “Azuchi Momoyama period”, “Muromachi period”, “Nanbokucho Era”, “Kamakura period”, “Heian Era”, “Enryaku” and the procession goes back to the era.

As an aside, my sister has participated in this festival wearing the costume of Baekje. At that time, there is a memory of was taking a lot of pictures around the procession.

Heian Shrine is located in Okazaki, Sakyo-ku, Kyoto. It was planned as part of the Greater Palace restoration project at Heian Capital at the National Industrial Exposition held in Kyoto commemorating 1100 years after the capital moved to Heian-Kyo on April 1 in 1895, it was erected in the land of Okazaki, Sakyo-ku.