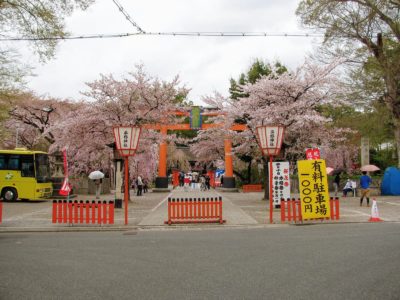 Hirano Shrine is a shrine built by the emperor Kanmu to coincide with the capital has moved to Heian-Kyo in 794. This is a famous shrine as a cherry blossom attraction, About 50 species and 400 cherry blossoms have been planted, and there are many stalls and cherry blossom visitors at the time of Hanami.

Because Hirano Shrine worship the Hime Okami, a woman’s guardian deity, it is said that the flowers and women’s shrine that there are divine favour, such as children and good match.

The Hirano shrine is located a little south of Kinkakuji, near the northernmost of Nishioji street. You get off at the bus stop of the Kyoto municipal Bus “Kinugasako-mae”, and walk a little to the north.

Kitano Tenmangu Shrine is located in Kamigyo-ku, Kyoto-city, and also known as Tenjin-san and Kitano-san. Kitano Tenmangu is a shrine dedicated to the famous Michizane Sugawara as the god of learning, and now collects the faith of many students.

Kinkakuji is a temple of the Rinzai Shokoku Temple sect which says the official name is Rokuon temple. As its name, it is a very beautiful and famous temple that covers the exterior walls of the building with real gold leaf.