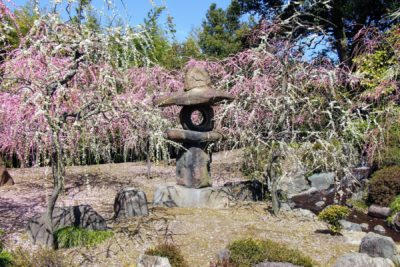 When the capital moved to the Heian-kyo which is the place of the proper arrangement of four gods, Jounangu Shrine was built in the hope the peaceful country and the protection of the capital. Here, the Guardian god of the Land “Kuninotokotachi-no-mikoto”, excelled in heroism “Yachihoko-no-kami”, delivery and the Guardian God of parenting “Jingu-kougou” and the gods are enshrined.

The grounds are called the shrine garden (Rakusuien), which is a garden where you can enjoy the beauty of each season. There are 80 kinds of flowers and trees drawn in the Tale of Genji, and it is popular as the “garden of the Tale of Genji”. The garden is divided into five areas, each with the following contents.

“Spring Mountain” is a spring-themed area with camellia, weeping plums and trefoil azaleas. It is said that it was a mansion of the Hikaru-genji of the Tale of Genji and a model of rokujo-in with the garden of the Four seasons.

“Heian’s garden” is said to have modeled the garden of Shinden-zukuri, the aristocratic residence of the Heian period. In the garden, there is a pond that copies the shadow of the trees, and the moss Garden spreads, and the Gan called “Kyokusui-no-utage” is held here twice every year. This place is worth seeing fresh green, red leaves and especially from early summer to late autumn.

“Muromachi Garden” is a pond fountain migratory garden made of the Muromachi era style. Nishikigoi is swimming in the pond, and the island in the center of the pond grows the pine tree which is a symbol of longevity. The wisteria of April, the Azalea of May, and the autumn foliage season are about to be seen.

“Momoyama Garden” is a karesansui garden that represents the sea without water, and the spacious lawn represents the ocean and the scattered rocks represent the islands of the coast. The cherry blossoms in April, the azaleas of May, and the fresh green season shine beautifully.

It is especially known as the Weeping Plum and Camellia garden, where many worshippers visit each year in the plum season.

The beginning of Fushimi Castle (Fushimimomoyamajou) was that he built in Fushimi Shigetsu in August 1592 after Toyotomi Hideyoshi began sending troops to Korea (battle of bunroku).