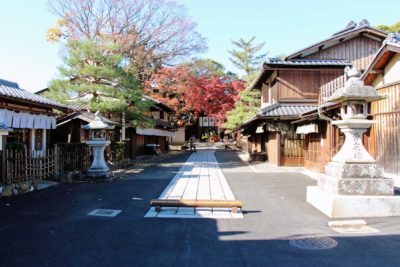 Imamiya Shrine is a shrine in Murasakino, Kita-ku, Kyoto. Also known as the Shrine of marry into a wealthy family.

There are two Meibutsu grilled Mochi shop on the doorstep of the shrine’s West Gate. They say to each other “the original” and “upstream”, and among the local people, it is famous that they do not know which history is long. Please note that both shops are closed on Wednesdays when I went to take pictures.

There are many shrines in the Imamiya shrine and it is a fairly large shrine. However, the aging of the building is progressing, and the remodeling is desired.

The Yasurai Festival on the second Sunday of April every year, Imamiya Festival in May, and the Rei Festival are held on October 8 and October 9.

The Daitokuji Temple in Murasakino, Kita-ku, Kyoto, is a temple that has many temples standing on its premises.(sub-temple) Kotoin is one of them, and only four of Daitokuji's sub-temple are open to the public on a regular basis.

Kinkakuji is a temple of the Rinzai Shokoku Temple sect which says the official name is Rokuon temple. As its name, it is a very beautiful and famous temple that covers the exterior walls of the building with real gold leaf.