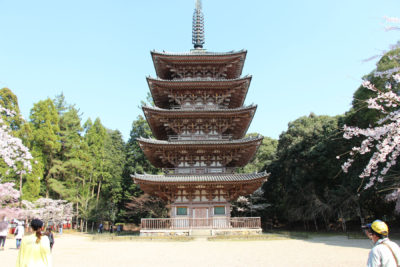 Daigoji is a temple of the Shingon Daigo head in Daigo, Fushimi-ku, Kyoto City. The principal of the temple is the Yakushi Buddha, and the founder is Rigentaishi Shobo. It is registered as a cultural property of the old Town Kyoto as a World heritage site.

Near Daigoji was devastated by the War of Onin, however Hideyoshi Toyotomi held the “Hanami of Daigo”, the near Daigoji was revived in the wake of it, it became the current figure.

This time, I went to Daigoji to shoot at the time of the cherry blossom hotseat. I walked to Daigoji, but the distance from the subway Tozai line Daigo station was far more than I expected, so I was very tired. I regret that I should have used the bus here. There were a lot of tourists in the precincts, and everyone was strolling in their own way.

It was a five-storied pagoda that was especially eye-catching in the Daigoji. There is a feeling of faded a little of the building, but the tower which carries out the heaven is splendid very much. In addition, I came to sanpo-in, but the garden here seems to be a garden where Hideyoshi Toyotomi made a basic design by himself when “Hanami of Daigo”, it is a Japanese garden with a wonderful atmosphere that looks like the Momoyama period.

The Bishamon temple in Yamashina ward, Kyoto City is a temple of Tendai sect. Bishamondo is one of Tendai sect Kyoto five gate traces and is also called Bishamondomonzeki. The Izumo Temple of Bishamondo's predecessor is said that Gyoki founded in 703.

Byodo-in is a deeply related temple with Mr. Fujiwara in Uji City, Kyoto Prefecture. Since the 17th century, sects combined as Tendai Buddhism and Jodo sect, and now they do not belong to a specific denomination.