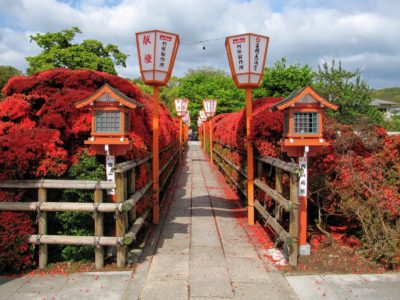 Nagaoka Tenmangu is a shrine in Nagaokakyo city, Kyoto Prefecture, and is known as “Tenjin-san” and “Nagaten-san” among its citizens. The shrine is famous for its azalea flowers. The best of Kirishima Azalea which is planted a lot is the end of April, and the vivid red reminds me of the foliage.

In the neighborhood of this shrine, I saw a few shops selling the fresh bamboo shoots that day. It will be a good souvenir for those who visit from April to mid-May, which is the season of Nagaokakyo bamboo shoots.

Access to Nagaoka Tenmangu Shrine is a 10-minute walk west of Nagaoka Tenjin station on the Hankyu Kyoto line. If you are accustomed to Kyoto, please be careful because you will hit sense of direction.

Komyoji is a temple located in Nagaokakyo city, Kyoto Prefecture, and it is the Head temple of Nishiyama Jodo sect. This temple is the place of the Rikkyo Kaishu where Enkotaishi Honen the sect founder firstly spoke of Nembutsu in Japan.

Otokuni Temple is a temple of Shingon-shu Buzan-ha located in Nagaokakyo city, Kyoto Prefecture, famous as peony temple. Although the foundation is not certain, it is presumed that it was founded before the Nagaoka-kyo construction, the Nara period.