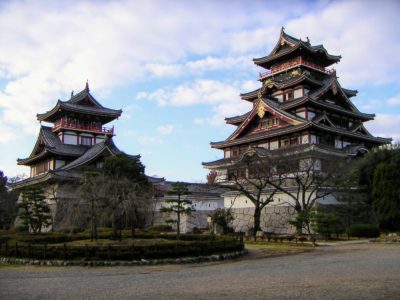 The beginning of Fushimi Castle (Fushimimomoyamajou) was that he built in Fushimi Shigetsu in August 1592 after Toyotomi Hideyoshi began sending troops to Korea (battle of bunroku).

Although the Fushimi Castle collapsed by the Keicho Fushimi earthquake immediately after completion, and rebuilt by changing the place to Kobata Mountain, the majority of the catsle building was burnt down in the Battle of Sekigahara. After that, it was rebuilt by Tokugawa Ieyasu, and it was made to the abolition castle in 1619.

The existing castle tower is the one that was imitation as a specialty of the amusement park “Fushimi Momoyama Castle Land”, and is bestowed to Kyoto City after the park is closed then it remains until now.

The castle tower has been moved to a different location because it is used as the Meiji Emperor Crest. In addition, because the building does not meet the seismic strength, it is not possible to tour the inside of the castle tower.

Byodo-in is a deeply related temple with Mr. Fujiwara in Uji City, Kyoto Prefecture. Since the 17th century, sects combined as Tendai Buddhism and Jodo sect, and now they do not belong to a specific denomination.